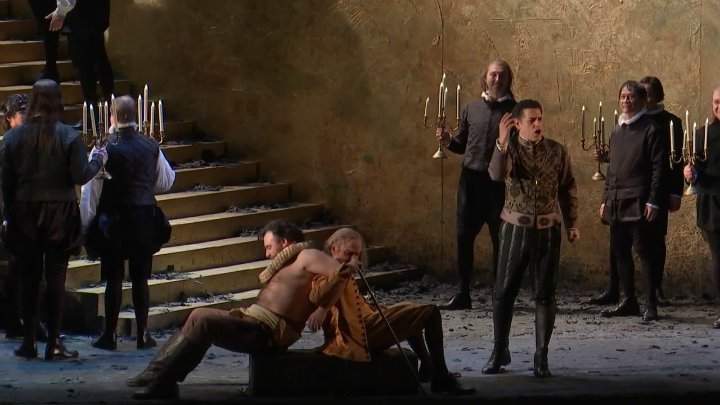 With their performances sold out, opera theaters can afford to be generous and donate a free live broadcast that will be seen by a much larger audience. And, who knows, one day even one in a thousand of these viewers may want to see live what he had enjoyed on-screen. It is planting the seeds for the future and now many theaters are committed to offering their productions in video streaming. The Wiener Staatsoper is no exception, especially when it’s the case of a popular title that boasts a trio of international superstars among the vocal performers. Add to that a renowned director and an esteemed Italian conductor and it’s “a done deal”. Almost done…

The dreading notes of Rigoletto‘s “curse” once more resonate in the creamy and golden hall rebuilt after WW2. Here these notes have a particularly ominous colour, with the brass lined up on a raised setting on either sides of the orchestral pit.

Rigoletto is shirtless, only wearing a jester’s ruff. His back is bent due to the burden of age and to the bullying he has suffered – he is not a hunchback. Tired and heavy, he climbs the stairs of Christof Hetzer’s desolate scenery – earthy colours, dark walls, basements littered with garbage. The rotating set shows Rigoletto’s house with Gilda’s “cage” and finally the skull shaped hovel of Sparafucile.

Carlos Álvarez’s Rigoletto has a beautiful legato and a noble timbre, but he is a bit monotonous and more colours would be preferable in his performance.

Juan Diego Flórez not only restores the Duke’s cabaletta of the second act, he also sings the reprise with variations, but with no high C. His limited vocal power is balanced by the elegance of phrasing and ease in the high register. His «La donna è mobile» has become a recurrent encore in his recitals. On stage we appreciate his youthful prowess: «giovin, giocondo, sì possente, bello» (young, jolly, so powerful, beautiful) says Rigoletto, «troppo è bello e spira amore» (he is such a beauty and inspires love), echoes Gilda, while Maddalena laments her brother’s murderous project, «Peccato! … è pur bello!» (what a shame! … He is beautiful too!). Unfortunately Flórez was badly served by the microphones and his voice came and went as he moved on stage.

Olga Peretyatko’s Gilda shows great sincerity and the  well known vocal timbre. She demonstrates great prowess in her vocal agility and well performed dramatic moments, but most of the cheers of the Viennese audience are saved for the two males.

Nadia Krasteva was the Maddalena we expected while her brother Sparafucile, in Ain Anger, has a voice so cavernous that it is almost incomprehensible. The Monterone of January 28 was so terrible that he was executed on the spot and his body remained there while Gilda and Rigoletto sang their duet.

Pierre Audi doesn’t bring anything new. His direction has some inconsistencies, but his interpretation does not affect the understanding of the story which unfolds smoothly: the thunderstorm has lightning, the Duke’s thugs have ugly faces, Maddalena’s dress is red. The costumes are vintage and the merry women of the first scene have their faces caged so as to emphasize the submission of the female to the male. Not really memorable is the acting: Alvarez moves like a caged bear, Flórez raises arms in the high notes and Maddalena raises her skirt to show her legs.

Evelino Pidò’s conducting is heavy, dragging and without accents. Luckily he has an orchestra under him that compensate for a boring routine.

(Many thanks to Sthephen and Loredana Lister for the revision) 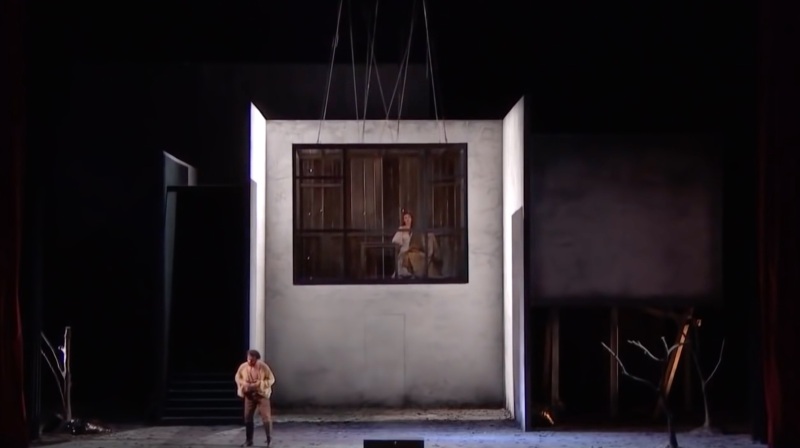